How to move forward with the energy transition remains by and large a technical and economical debate. Yet Social Science and Humanity Researchers are convinced that justice and inclusion are crucial to the progress of this transition. As part of the Energy-SHIFTS policy fellowship programme, DRIFT researcher Nena Bode took on the role of matchmaker to bridge this gap between policy makers and scientists. Her hopes: concrete, new energy policies. In this blog, she dives into what the programme achieved, the insights she got out of it and what that told her about her expectations.

Over the past few months I have facilitated a collaboration between six policy workers and Social Science and Humanities researchers all across Europe. Each policy worker introduced a challenge to do with justice and inclusivity in their energy transition practice. As a ‘matchmaker’, my role was to connect each policy worker to the right researcher to help them with their challenge. After initial interviews, the exchanges took place in one-on-one calls and a group webinar. Here’s what I learned:

The policy workers and researchers involved in energy justice are threading relatively new ground. I could see it in the diversity of thoughts in the discussion. During the one-on-one meetings, issues of participation, energy poverty, and marginalized groups were discussed from multiple contexts. I learned for instance that the EU has no definition for the group of ‘vulnerable consumers’ making it difficult for EU member states to address the problem of energy poverty appropriately. One of the researchers argued that ‘social issues’ like energy poverty and ‘the energy transition’ are two different things that should not be mixed up. I saw that the controversy around the topic caused the discussion to drift to sustainability and the energy transition more in general.

The final group discussion remained explorative. It showed me that energy is not yet widely recognized as a social policy issue, not even among participants. However, exploring the controversies helped to focus the discussion on issues of energy poverty and vulnerable groups. It showed the importance of collectively figuring out the meaning of core concepts and needed knowledge.

Policymakers and researchers can be overly polite when introduced to each other. Meanwhile, there wasn’t much time for interaction during the fellowship. It struck me that people need time to become honest with each other. One policy worker noticed that after listening carefully for an hour to what researchers had to say, she found herself thinking: “and what now?” She still struggled to apply academic insights to her daily practice. For example, while a researcher mentioned a ‘political decision’, implying it was outside of her sphere of influence, she did not have a chance to say that actually it wasn’t, and she is part of that decision-making process.

Meanwhile, researchers sometimes felt there was little room to broaden the perspective of policy workers. One researcher noticed that ‘their’ policy worker expected them to provide instrumental facts and figures to back their lobbying cause. But this is not necessarily what Social Science and Humanities researchers can or want to bring to the table. Looking at problems holistically, researchers can offer critical perspectives as departure to develop causes, rather than the other way around. This misunderstanding revealed different expectations from both sides.

“I notice that many of the questions are like ‘how to do this and how to do that’. Possibly, the expectations of policy advisors are different from what researchers can offer. Researchers do not necessarily know the solution, but can rather share various insights and reflections that can help policy makers make a decision themselves.” – participating researcher

I learnt that to really bridge the gap between science and practice, people need time to understand each other’s institutional culture and constraints. In fact, I would recommend more long-term collaborations on concrete cases in order to go beyond polite exchanges and invite more difficult discussions. Intermediates like us also have an important role in managing expectations from researchers and policy workers.

Let’s not get lost in translation

Many of the exchanges concerned were about constructing a common terminology. It’s a scientific staple to aim to elaborately and critically define concepts, which are all constructed in their own academic tradition. A policy worker however noticed that in their world these concepts live their own life. Out there, terms are redefined on the go: politicians give new meaning to terms to match their agendas.

These different understandings might well be the main reason why policymakers have difficulties finding academic sources, and why scientific evidence does not reach policy audiences. As Hiteva and Sovacool also write: “(…) one of the biggest challenges facing the energy justice agenda is translating the normative concept to an ‘operational’ one that can be understood and implemented in policy and business” (2017:632). I learnt in this programme that concepts are also subject to political manoeuvring, and open discussions like ours could help that translation process.

We need to continue

I’ll confess, my personal hopes for concrete policy changes as a result of this fellowship were too high. But the programme definitely brought participants new insights and created space for learning. While some participants had initial doubts whether their match was right, most indicated that this is precisely the interdisciplinary collaboration needed to tackle issues of energy justice. Most participants said they enjoyed meeting other motivated energy professionals passionate about similar topics – policy makers or academics alike.

Most importantly, the fellowship created openings for further collaboration. Relevant resources and networks were exchanged, and plans were made to co-author a paper. It seems to me that the policy associate-fellow combination is a potential fruitful setup worthy of further exploration and application. For similar future initiatives, or a follow-up, policymakers and academics could be supported to co-produce an event, op-ed or policy document over the course of a longer term collaboration.That way, the commitment and preparation of policy makers and researchers could really become a matter of course. I call out to all process facilitators and intermediaries to use these insights to create even more valuable exchanges between science and policy. 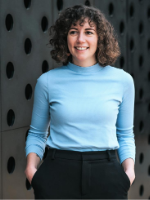 Nena holds a BA in cultural anthropology and a MSc in industrial ecology. During her studies she took courses in psychology, arts, global economics, communication, business strategy and design. She combines understanding of culture (such as social behavior, power relations, belief systems) with her knowledge of sustainable technology to unravel complex problems and develop strategic action.

Tweets by EnergyShiftsEU
Go to Top