Skip to content
You are here:Home-Blogs, Uncategorized-From Energy-SHIFTS to Australia: Practical case in just transition

From Energy-SHIFTS to Australia: Practical case in just transition

In this blogpost, Olena Nedozhogina describes how useful have been her lessons learnt by participating in Energy-SHIFTS scoping workshop in her new life in Australia

One of the highlights of the summer 2019 for me was supporting the workshop on the just transition to sustainable energy, organized by the Energy-SHIFTS project. It was a unique experience of meeting very different stakeholders associated with the coal industry – and moving away from it; moreover, a unique experience of a workshop where participants were enthusiastic, energetic and empathetic to each other. As opposed to simply saying/doing their part and moving on, I felt like there was a lot of room for ambitious, future-oriented thinking – and that gave me a lot of optimism.

When the workshop was over, I returned to my doctoral thesis – it’s focused on digital activism and especially activism that crosses national borders (on the case of Eastern Europe). The workshop provided a valuable look into how this actually happens – how problems that require solutions spanning different countries get tackled. I continued working on developing the thesis, when I got the news – my exchange to Australia was approved, and I hurried to move there.

Now it’s been one year since I moved to Melbourne – in the south of Australia. Just couple of months after moving in, before the calamities that were to follow happened, Melbourne had one of the biggest climate strikes in Australia, with hundreds of thousands of participants (150,000 attended in the city center alone). Some movements present there focused on the controversial re-opening of the Carmichael coal mine by the Adani Australia company – the move opposed by a large chunk of the population. In the age where most Western countries are moving away from coal mining, Australia surprisingly holds on to the environmentally harmful industry. This also comes in the context of Australia actually having had one of the most progressive pieces of environmental legislation in making – the Carbon Tax – for two years (2012-2014) – before it was repealed by the cabinet that came after. The Carbon Tax years saw the sharpest drop of CO2 to GDP ratio, and this fact is even more sad in the context of what followed later in the year.

Just a couple of months after, with the exceptionally hot and dry summer, at the backdrop of withdrawal of funding to public services that look after wildlife and fire safety, the bushfires of 2019 hit hard. The fires` severity alternated from state to state – while the situation was debilitating in New South Wales, Victoria (where Melbourne is located) seemed safe for a time. In a month, however, fires started in the east of Victoria too, with people stranded on the beach under red skies. This was one (not the first one, and not the last one) peek into our future of unhinged climate change, without necessary accommodation made for the transition.

This all seems very far removed today, after several months of staying inside, and other global threat comfortable settling on top of our agendas. But the message I am taking away from this year is that the repercussions for not acting, not addressing the challenges of transitioning to sustainable energy industries are much more gruesome than what we can ever imagine. 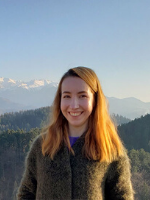 Olena Nedozhogina, PhD in sociology/media at the University of Tartu, Estonia – visiting fellow at University of Melbourne, Australia